Gene therapy has the potential to transform how monogenic disorders are treated, and further development in the characterization of viral vectors is a step toward realizing this potential. The most popular viral vector for in vivo gene therapy is the adeno-associated virus (AAV) due to its non-pathogenicity, versatility, as different serotypes can be used to target different organs, and capacity to elicit a weak immune response. In addition to recently FDA-approved AAV-based therapies for Leber congenital amaurosis and spinal muscular atrophies, clinical trials using AAV have shown promising results for eye diseases, hemophilia, and muscular disorders.

To realize the full potential of AAV-based therapies, it is necessary to eliminate impurities in the AAV manufacturing process that decrease the efficacy of treatments and increase their cost. One such common impurity are viral capsids that lack the therapeutic transgene, or light capsids: currently 70%–95% of produced viral capsids are light. Light capsids reduce the potency of the final product and may even trigger undesired immune responses. The presence of light capsids thus constitutes a critical quality attribute that needs to be understood and monitored to drive further advancements in viral vector gene therapy.

Light capsids may be reduced by various upstream cell culture strategies. Choice of cell line, production plasmids, and cell culture feed can influence the packaging of therapeutic DNA into the viral capsid and reduce the number of light capsids. To further improve potency and quality, light capsids may be removed during downstream purification by anion exchange chromatography or preparative centrifugation. Characterization of light capsids and the overall packaging efficiency of viral capsids is necessary for upstream and downstream process development. In addition, light capsids are a critical quality attribute for the final drug product and must be monitored during the manufacturing process.

Through a collaboration between Massachusetts Institute of Technology (MIT) and Biomarin Pharmaceutical, we developed a technology to quantify the light capsids in preparations of AAV-based vectors. 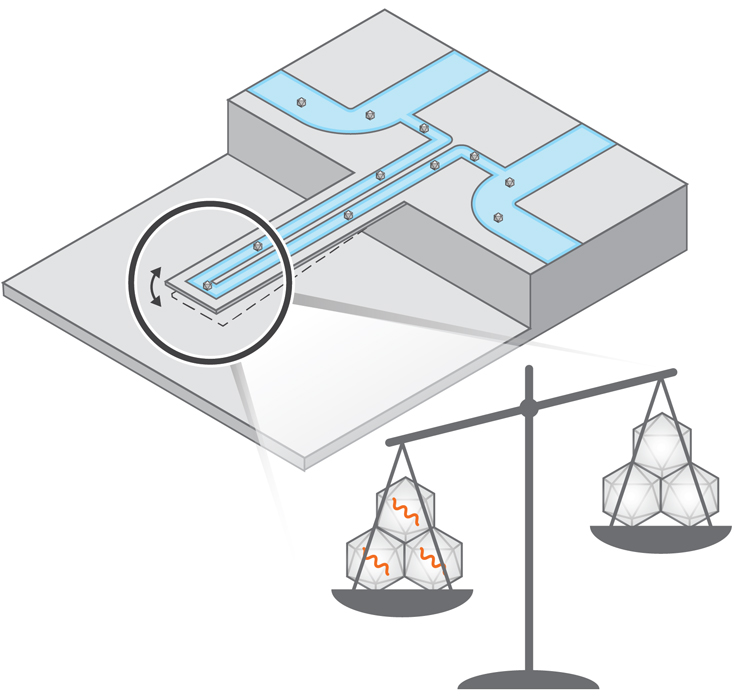 A range of methods are used to quantify light capsids, with each having distinct advantages and disadvantages. ELISA and PCR are widely used biochemical techniques that give a ratio of capsid titer to vector genome titer but can give varying results depending on antibodies and primers. Analytical ultracentrifugation (AUC) separates viral particles based on density and is the current gold standard for quantification of light capsids but has low throughput and requires high volumes of sample.

Our method is orthogonal to the existing ones and is based on the suspended nanochannel resonator (SNR) technology, which is fabricated using conventional silicon fabrication approaches. Our method utilizes a hollow, water-filled tube that we force to vibrate at its resonant frequency. Similar to a string of a guitar, the heavier the material inside the tube is, the lower its resonant frequency becomes. For example, if a single gold nanoparticle flows inside our tube, it decreases the resonant frequency in proportion to its mass. However, a single AAV particle cannot be weighted using our tubes because it is much lighter than similar size gold nanoparticles (4 to 6 MDa as opposed to 150 MDa).

To enable the measurement of AAV, we simultaneously flowed tens to hundreds of AAV inside the SNR, obtaining a complex signal of change of resonant frequency. At first glance, this complex signal resembled experimental noise. However, we observed that the heavier the AAV was, the higher the intensity of the “noise signal” became. Writing down a mathematical formulation accounting for characteristics of vibration, we theoretically proved that the intensity of the signal is proportional to the average mass of AAV in solution.

To validate the theory, we used gold nanoparticles of a known mass that was comparable to that of AAV. Flowing these nanoparticles as reference standards inside the SNR, we applied our theory to experimental measurement of “noise signal” and calculated mass values that were in agreement with the known mass we knew a priori. This agreement validated our theory, confirming that we had an experimental measurement of nanoparticle mass.

Then, we used SNR to measure the mass of AAV particles. We designed our study around two types of AAV that were commercially available: the first was AAV that was nominally empty (0 kilobases of DNA), and the second nominally contained genetic construct of green fluorescent protein (around 3 kilobases). Flowing these two types of AAV into the SNR at various concentrations and mixing ratios between them, we measured average mass that was consistent with the expected theoretical values. Since the theoretical mass of empty or full AAV is known a priori, we converted the measured average mass of AAV to a ratio of light capsids. Thus, using the SNR, we obtained ratios of light capsids that were consistent with other orthogonal methods such as AUC and SEC-MALS (size exclusion chromatography coupled to multi angle light scattering). Our method is meant to complement, not substitute, AUC, albeit offering a quicker (~10 minutes) readout of average mass with minimal amount of sample (1 to 5 μL).

In that context, our method is an orthogonal method to SEC-MALS as it measures average mass. However, our method also simultaneously monitors aggregates in solution, which due to their bigger size, can be measured at the single-particle level. The amount of AAV aggregation is a complementary critical quality attribute that has been correlated with immunogenic effects in AAV-based clinical products, often reducing their potency.

All in all, SNR is a flow-based method; it has the potential for online integration with other upstream measurements from chromatography columns to light scattering instruments. SNR offers the possibility of real-time and continuous monitoring of light AAV capsids by directly measuring the mass of viral vectors using first principles of physics. This method is orthogonal to and complements other emerging methods for viral vector characterization, including SEC-MALS) analytical AEX (anion exchange chromatography), and mass photometry.

In addition, SNRs can be used to measure other types of viral vectors, such as lentivirus and adenovirus. Since the former are heavier than AAV, our approach can weigh these larger viruses with resolution at the single-particle level. In future research directions, we envision a synergistic approach of multiple experimental readouts, combined with molecular engineering, process development, and mathematical modeling that can lead to new paradigms for scaling up production of viral vectors.

The results were published last week on February 11, 2022, at ACS Nano Letters.

Georgios ‘Yorgos’ Katsikis is a postdoctoral associate at MIT. His research focuses on analytical technologies for characterizing viral vectors. Prior to MIT, he worked as an R&D engineer at Carbon, a 3D printing startup company in Silicon Valley. He earned his Ph.D. in mechanical engineering from Stanford University. His research interests include microfluidics, biomedical devices, biophysics, and rapid prototyping. He can be reached on LinkedIn or by email at katsikis.g@gmail.com.

Wade Wang is a scientist at BioMarin Pharmaceutical. He works in purification process development and specializes in the characterization of adeno-associated virus. He earned his Ph.D. at MIT under the direction of Prof. Paula Hammond. He can be reached on LinkedIn or by email at wade.wang@bmrn.com.