How Sherlock Holmes Helped Me Improve My Microbiological Root Cause Analyses 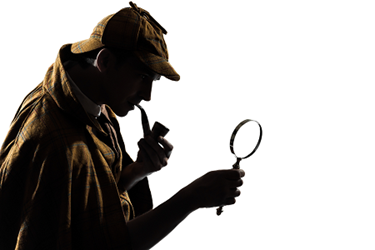 Whenever a microbiological data deviation occurs, a thorough investigation and root cause analysis (RCA) must be conducted. It is expected that the root cause for the deviation be clearly identified and either eliminated or mitigated to the extent possible through appropriate and effective corrective and preventive action (CAPA). This is necessary to ensure patient safety and allow for continuous improvement of our products and processes, and this expectation is strictly enforced by international regulatory authorities. However, microbiological data deviation investigations (MDDIs) and RCAs are notoriously difficult to perform, even for the most experienced microbiologists. (For further discussion on conducting MDDIs, please see my previous article.)  Unless one is fortunate enough to have a video recording of the event showing exactly how the deviation occurred, providing sound and scientifically justified evidence to support any identified root cause can be problematic.

“A Study in Scarlet” by Sir Arthur Conan Doyle was published in 1892.1 It was the first of many novels detailing the adventures of the world’s most famous fictional detective, Sherlock Holmes. The methodology Holmes used to solve his cases formed the basis for many of the criminal investigation methods used by law enforcement today. Perhaps not surprisingly, many of the principles applied by Holmes also effectively apply to conducting successful microbiological RCAs.

In solving his cases, Holmes relied on logic, deductive reasoning, and, most importantly, observation and simple common sense. He accepted only hard evidence and avoided speculation. Microbiologists are supposed to do the same, but many of our investigations and RCAs are riddled with bias we don’t even recognize. Sherlock Holmes was a master at avoiding bias.

This two-part article contains a collection of some of the most famous quotes attributed to Holmes that can be applied to microbial RCAs. Keeping them in mind when conducting your analyses can greatly increase your chances of success in identifying that elusive definitive root cause.

“The world is full of obvious things which nobody by any chance ever observes.” – Sherlock Holmes, “The Hound of the Baskervilles”2

How often in our daily lives do we find ourselves in the proverbial doghouse because someone we see every day is proudly sporting a smart new outfit or hairstyle and we fail to notice? We fail to notice the difference because, as Holmes succinctly put it, we see but we do not observe.3 Constant repetition can be blinding. Think about an average day in your workplace and the routine activities you perform every day. When the same task is performed in the same manner time and time again, we tend to expect that everything will be the same as it was the last time, so we tend not to recognize minor changes or variances at the moment they occur. We usually don’t recognize that something has changed until we get an unexpected result.

Consider the following scenario. An analyst working in a busy lab is required to prepare a set of serial dilutions to test a routine sample. The procedure requires the analyst to vigorously mix each dilution before preparing the next. The analyst performs the same set of serial dilutions by the same method every day. On one particular day, there is a distraction and the analyst fails to mix one of the dilutions before preparing the next, and the eventual assay result is out of specification (OOS). An investigation and RCA will be initiated, but depending on the type of assay, the investigation may not begin for several days after the analyst performed the test.

When performing a laboratory investigation, it is customary to interview the analyst to determine if anything unusual occurred during execution that could have resulted in the OOS result. However, the method of questioning is key. Simply asking the analyst if anything unusual occurred while they were performing the assay in most cases will result in an answer of “no.” This is because a competent, qualified analyst would have automatically invalidated the assay and repeated it had they realized an error occurred. If the analyst fails to recognize the error in the moment it occurs, what is the likelihood they will recognize the error three to seven days later?

It is therefore helpful to ask the analyst to recreate the event and describe each step of the assay and what was going on around them at the time. Examples of good questions to ask include the following:

In many cases, this line of questioning can reveal a point in the assay where there was an interruption or distraction, and the analyst in retrospect will not be able to verify with complete certainty that every step was performed correctly or completely.

“It has long been an axiom of mine that the little things are infinitely the most important.” – Sherlock Holmes, “A Case of Identity”4

Depending on the task being performed, the little things can indeed be the most important. Consider the following scenario. An analyst uses a commercially produced calibrated microbial suspension to perform an assay. The analyst is required to dispense a precise amount of the suspension onto an agar plate. The suspension is from a qualified lot that has been routinely used by multiple analysts for some time and produces consistent results. However, after incubation, the analyst finds that the calibrated suspension has yielded a count that is far lower than expected and is also well outside the normal range of variation for the lot. An investigation is initiated to determine the root cause of the failure. There are a number of common errors that can result in the unexpected count, including, but not limited to, the following:

With so many possibilities, oftentimes the root cause will be generalized and simply reported as “analyst error.” However, taking the time to determine which cause is the most likely is critical to ensuring that there is no repeat occurrence through appropriate and effective CAPA.

At a minimum, the procedures that the analyst utilized should be carefully reviewed. A well-written procedure should ensure that common potential issues and how to avoid them are addressed. If the procedure specifically requires the analyst to perform, verify, and/or document each of the above points (e.g., record the amount to be dispensed, hold the micropipette in a particular position, ensure the tip is secure, push the plunger fully down, and gently wipe the tip against the surface of the agar after dispensing, etc.), the likelihood of reoccurrence can be drastically reduced, even if the true root cause cannot be conclusively determined.

It is equally important to ensure that the procedure is clear enough to prevent individual interpretation. Consider the previous scenario involving the dilution series. If the procedure does not specifically instruct the analyst how to prepare the series, it is likely that individual analysts will employ different methods and dilution schemes, resulting in inconsistent assay performance.

Similarly, it should be verified that any training the analyst received was clear, appropriate to the task, and, most importantly, that the training content and method of delivery was consistent for all analysts qualified to perform that task. Inconsistency in training content, delivery method, or both can result in inconsistent performance and, subsequently, inconsistent results. This is common when analysts train each other, unless the trainers themselves are specifically trained in what content is to be delivered and how it is to be delivered. The ability of the trainers to effectively deliver the content and verify correct understanding should also be evaluated. Training is more than a skill, it is an art, and the most experienced personnel are not necessarily the best trainers.

It is also important to verify that all trained analysts correctly interpreted and clearly understood the training content and that all analysts are performing the task in exactly the same manner. Errors in interpretation or understanding are often difficult to uncover, as the analyst or operator involved in the deviation will not readily recognize it. They will almost certainly believe that they are interpreting and understanding correctly. Therefore, it is a good idea to review the procedures and associated training content with the affected analyst and have them explain the content in detail to the investigator. These finer details concerning the procedures and the training program are often either overlooked or insufficiently scrutinized by investigators.

The points presented here demonstrate how applying some of Holmes’s most famous quotes can greatly increase an investigator’s chance of finding the definitive root cause by prompting them to include and address more obscure and frequently overlooked sources of potential error and deviation. Part 2 of this article demonstrates how applying some of Holmes’s other famous quotes can reveal hidden bias that may not only misdirect the course of an investigation but can actually prevent the investigator from uncovering the definitive root cause.

Paula Peacos is a senior consultant with ValSource, Inc. She has over 25 years of industry experience as a microbiologist, working for contract manufacturing organizations as well as small, midsize, and large pharmaceutical organizations. Peacos has extensive experience in aseptic processing, API/drug substance manufacturing, cell therapies, nonsterile production (both clinical and commercial), microbiological laboratory management, and performing compliance audits internationally. She is an experienced trainer and has developed and implemented customized developmental and remedial programs. Peacos has also published articles and delivered presentations at industry meetings on topics such as risk assessment and using microbial recovery rates for trending analysis. You can contact her at ppeacos@valsource.com.